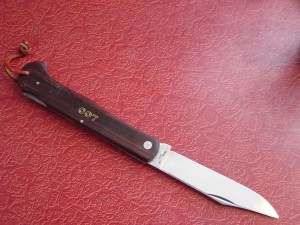 The 007 knife is an embodiment of New York City’s decline in the 1970’s. The more you read of the street life in that era of the city’s history, the more you come across the 007 knife. As far as I know it was sold throughout the country (it is mentioned in courtroom documents in Massachusetts and Illinois) but it is not written into the history of any other place the way it is of New York City. Mention the 007 knife to a New Yorker of a certain age and background, and they’ll have a story for you.

Cheetah Chrome: Dee Dee Ramone had given Stiv Bators a 007 knife at one of our first gigs. Stiv carried it all the time, and one time, we were up at the Chelsea Hotel and the 007 was just lying there on a nightstand or something. Stiv just picked it up and mentioned that Dee Dee had given it to him… Dee Dee was Sid (Vicious)’s hero and as soon as Sid found out that Dee Dee had given the knife to Stiv, Sid wanted one too. So a couple days later we all went up to Times Square so that Sid could buy one.

Accounts differ, but that self-same 007 knife is often identified as the one that Sid Vicious killed Nancy Spungen with (most interestingly, here, by Sex Pistols manager Malcolm McLaren who says that Nancy WAS stabbed by a 007, but Sid didn’t do it). Regardless, it struck me as interesting that Cheetah Chrome referred to a “007 knife,” as if it was a distinct and known type of knife. The detail stuck with me, but I had no idea whatsoever what type of knife the 007 was. The name obviously conjured up images of James Bond; in my mind’s eye JB carries some sort of dagger or perhaps an elegant stiletto of indistinct European origin.

A few years later I was reading boxing trainer Teddy Atlas’s autobiography, Atlas. He grew up on Staten Island in the 1970’s, and although from an upper middle class family (his father was a doctor), he had a wild adolescence, which led to multiple arrests and time on Riker’s Island before his teens ended. It also led to him getting 400 stitches on his face, courtesy of an 007 knife:

I threw the guy with the blackjack to the ground, and then saw the driver coming at me, saw the flash of a knife in his hand. It was this kind of knife called an 007, a flick blade. I remember thinking, That’s a double-oh-seven… It was too late. He stepped back and spun, like a matador, slashing the side of my face. The blade was so sharp, I barely felt it.

Atlas nearly died from blood loss. The 007 was not a fancy switchblade, or a hunting knife, but a simple pocket knife, with a long blade that opened with a flick of the wrist. Knives like these are called flick knives, folding knives, or gravity knives (due to the fact that when held in a closed position, the weight of the blade should be enough to allow it to open due only to gravity and maybe a flick of the wrist).

Like Teddy Atlas, Harley Flanagan also grew up rough in NYC in the 70’s. And like Cheetah Chrome and Sid Vicious, Flanagan was also a punk rocker, albeit a bit younger. He began playing New York clubs in 1979 as the 11 year old drummer for The Stimulators and later formed hardcore legends the Cro-Mags in the early 80’s. He grew up in his mother’s apartment on Avenue A, and in his possibly forthcoming memoir Life Of My Own mentions the ubiquitousness of the 007 among the Puerto Rican gang members in his neighborhood in the 70’s:

And everybody either had a golf club – like a cane – and/or a 007 knife, which was this huge knife, that from the handle to the tip was as big as your whole fuckin’ forearm! Those knives were real cheap – they sold them at every corner store. They were like three bucks – it was kinda like a gravity knife. 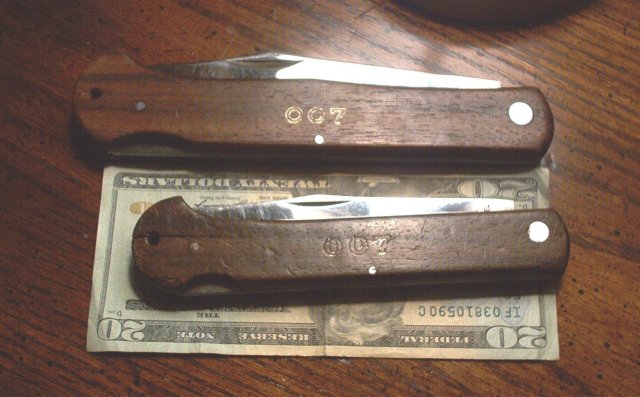 We can see Flanagan may be taking a bit of poetic license (which is fitting, as Allen Ginsburg also lived in that apartment building off of Avenue A) about the size of a 007, but not by much. Unfolded and pointed at your face, it would certainly present a memorable and fearful image.

It really doesn’t look like anything James Bond would ever carry. Who came up with the idea to label a cheap, wooden handled pocket knife with the “007” identity? Some sleazy import/export guy who placed ads in the back section of men’s magazines? Or the owner of the sweatshop in the Far East that churned these things out? Your guess is as good as mine. The leather buckskin strap is surely an essential 70’s detail; the detritus of the hippie fashion sensibility spreads even to implements of mayhem.

The more you read about NYC (low)life in the 70’s, the more you notice the 007. Due to its cheap price, ease of availability, and menacing size, the 007 knife was perfect for violent crime.  As an ex-cop posting on the longislandfirearms.com forum notes:

Back in the day in the Bronx all the mopes carried 007 knives. For those not familiar they are a folding wooden handled knife with a blade generally in the 5″-7″ range. Cheap, and they could ALWAYS be opened with a flick of the wrist... Most cops who worked the Bronx back in the 1970’s and 1980s have quite a collection of 007 knives. And the knives are really pretty much useless for anything other than cutting someone.

An amusing (in retrospect) article in Jet Magazine from May 24, 1973, discusses a mugger named Butch who, after giving a series of interviews to a newspaper reporter was “tracked down by Detective Phillip Gerard… from a picture in a daily newspaper which showed the back of his head and a 5 inch long ‘007’ knife he customarily carries.”

Funnily enough, Butch was not the only 007 carrying mugger who talked to reporters. In the book Jones: Portrait of a Mugger from 1974, reporter James Willwerth also tails a stick up kid and again notes his implement of choice:

Holding a concealed 007 knife, a model popular among muggers for its long blade and quick release, Jones hit the streets in the early evenings and mugged in dark, contained spaces like apartment hallways.

The quote above was from a New York Times article from 2004 describing the 70’s as the “Age of the Mugger.”  As the article correctly notes, people either not from New York or below a certain age have a hard time grasping how common and everyday these acts were. In a more recent article published a few months ago in the New Yorker,  Adam Gopnik writes, “If, in 1980, someone had predicted that by 2012 New York City would have a crime rate so low that violent crime would have largely disappeared as a subject of conversation, he would have seemed not so much hopeful as crazy.”

So, as the violent crime rate has gone down and mugging has for all intents and purposes disappeared as an everyday part of urban life, the 007 has disappeared as well. You can still see them on Ebay, but selling or owning a knife of that type is now illegal in New York City, due to both the size of its blade and its classification as a gravity knife. There are still local delis that sell cheap and nasty knifes in bad neighborhoods, but nothing with the size and grandeur of the 007. The 007 was almost like the Zelig of New York City violent crime, popping up everywhere under the most unlikely circumstances; the same knife cut both Nancy Spungen and Teddy Atlas. It was wielded by every two-bit stick up kid and gang member in all five boroughs. To an average subway commuter or late night stroller, it was the stuff of nightmares. This was the thing that caused you to give up your wallet and your watch. Apparently, the proverbial “junkie with a switchblade” was really a “junkie with a 007.”  The era of the 007 is over, but it cast a long shadow over the 1970’s.